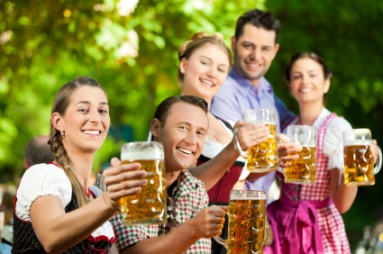 What started in 1810 as a public event to commemorate the marriage of Crown Prince Ludwig and Princess Therese of Saxe-Hildburghausen has now become the world’s largest people’s festival with attendance levels of almost 7 million people.

Held on the Theresienwiesen (die Wies’n - the meadows) in Munich, Oktoberfest in Germany runs for 17 or 18 days until the first Sunday in October and attracts visitors from around the world.

This festival is an absolute treasure trove of German expressions which every German translator will love, so here’s an overview for your amusement and education!

The festival opens at 12.00 with a twelve gun salute (Böllerschüsse) and the tapping (Stich) of the first keg of Oktoberfest beer by the Mayor of Munich with the local cry of "O' zapft is!" (“Es ist angezapft” – i.e., the keg has been tapped).

Now you may think that everyone flocks to celebrate Oktoberfest in Germany because of the beer, now around 12 euros a liter, and it’s true, they do! Six local Munich breweries have tents serving their own brands of beer.

But with an alcohol content of 6%, the beer is strong and visitors will often have to step over the slumped bodies (Bierleichen - literally 'beer corpses') of those who have overindulged.

This is a period of frenetic activity and hard work for all the tent staff, drawing and serving literally thousands of litre beer mugs (Maßkrugs) each day.

There are 14 large Bierzelten beer tents, from the traditional Das Hofbräu-Festzelt beloved of Americans and Australians, Das Weinzelt for those who prefer wine, to the Hippodrom, recommended for singles who fancy fizzy and flirting.

The beer tent atmosphere is accompanied by traditional music (Volksmusik) which usually gives way to louder pop bands in the evening.

Although drinking is the name of the game, Oktoberfest in Germany gives visitors plenty of opportunity to try a whole range of traditional German and Bavarian delicacies:

(And if that's got your tastebuds going, why not try making some of these dishes yourself - Oma Gerhild will help!)

In keeping with the fairground atmosphere, the Wiesn is full of stalls selling food and trinkets, and typical fairground rides and attractions.

Oktoberfest is a great venue for spotting the locals in Trachten or traditional costume: Dirndln, dresses with laced bodices for the ladies, and young men showing off finely tuned calves in their Lederhosen and traditional Sennerhut (hat with feather).

German translators keen on getting a better grasp of German expressions and the local Bavarian dialect will enjoy Das Wiesn Lexikon which includes unmissable entries such as:

There, hope that’s given you a little taste of Bavarian culture and linguistics!

Experience Oktoberfest in Germany for yourself!

There are also many Oktoberfest festival spins-offs around the world; the festival in Qingdao, China is the biggest outside Germany, attracting 3 million visitors each year.

Canada (Kitchener, Ontario) and Brazil (Blumenau) also have some of the largest Oktoberfests - a proven attraction for German tourists!

If you’re in the US, then you could try out some of your newly learnt Oktoberfest vocabulary at Oktoberfest USA, which has been run in La Crosse, Wisconsin for the last 50 years.

See you in October - at my local Wiesn celebrations in Vienna!