An umlaut is a symbol which describes the sound made by 2 adjoining vowels ("um" = around / "laut" = sound).

They are not separate characters of the German alphabet.

They are easy to pronounce, and sound like a combination of the initial vowel, plus “e”.

The 2 dots above the letter are called diacritic marks, and simply symbolize the “missing” e. 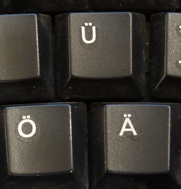 Umlauts on the right-hand side of my German keyboard

It's fine to write “ae”, “oe” and “ue” when you don’t have a German keyboard, although you can insert them in the form of symbols.

However, if you're regularly working in the German langugage, this will quickly drive you nuts.

If you're tech-savvy you can programme easy shortcuts on your keyboard (so I read).

If not, consider purchasing a German language keyboard! - "QWERTZ"

For those of you using an English-language keyboard (UK - QWERTY), just use this list of commands on the numeric keypad to the right of your keyboard (or number-lock if you don’t have the keypad):

Now just to be really confusing, here we have codes for the US keyboard - which also works for my German keyboard:

And if you work on a Mac, according to my research you simply:

German Umlauts on the web

The web doesn’t like non-standard letters, and so if there is an umlaut in a person’s name, for example, you should write their name out in full.

E.g.:  Herr Jörg Müller’s email address would be written out as  joerg.mueller@xxxx.xx

Where will I meet a German Umlaut?

1. Umlauts often signify that a noun is in its plural form, e.g.:

2. They are often found in the comparative form, e.g.:

3. They also appear in the second and third person singular in the present tense of several strong German verbs, e.g.:

If you’re looking for more background and indepth linguistic information on the German umlaut and its origins, then Wikipedia (of course!) it probably a good starting point .

But if you just need to know how to use them, then I hope that, for most of us, the information above will suffice!